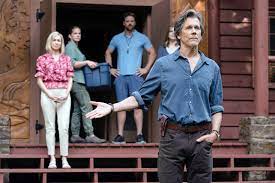 Whenever a horror movie gets terrible reviews, I instantly want to see it. I need to know what would provoke viewers into that level of hate. That’s why, when I saw the 2 and 3 star reviews of They/Them on Peacock, I immediately streamed it.

Like many of my favorite slasher movies, They/Them takes place at a summer camp. The twist being that this camp is a gay conversion camp that aims to ‘pray the gay away.’ The reality of these kinds of camps is horrible enough. However, this slasher movie uses the grim reality for a new twist.

A New Type of Character

The key characters in Peacock’s They/Them were among some of my favorites. I’ve always loved Kevin Bacon, and he doesn’t disappoint. He’s a charming villain, even when he’s doing his worst to the kids in the camp. Then there’s Theo Germaine. He shines in his role as a strong-willed camper.

The movie itself is a rather typical slasher film. The campers get trapped in the woods. The killer appears. People die. The end isn’t a surprise so much as a well-done conclusion. What makes the movie unique, of course, is the introduction of a mostly LGBTQ+ cast of characters.

And that’s the problem with the movie. Not the fact that They/Them revolves arounds a conversion camp, but because the movie wants to promote an agenda rather than create a thrilling horror movie. Don’t get me wrong – I appreciate both the diverse cast and the movie’s message. However, the movie literally breaks into song several times and becomes more of a Glee-inspired flick rather than a slasher flick. Because They/Them on Peacock doesn’t know what it wants to be, it ends up being nothing.

Still, I think the hate is undeserved. 2 to 3 stars is harsh judgment on a movie that dares to step out of the typical horror conventions. Even though it isn’t quite the slasher film I’d hoped for, it delivers plenty of tense moments. Personally, I would rate it as a 5.5.