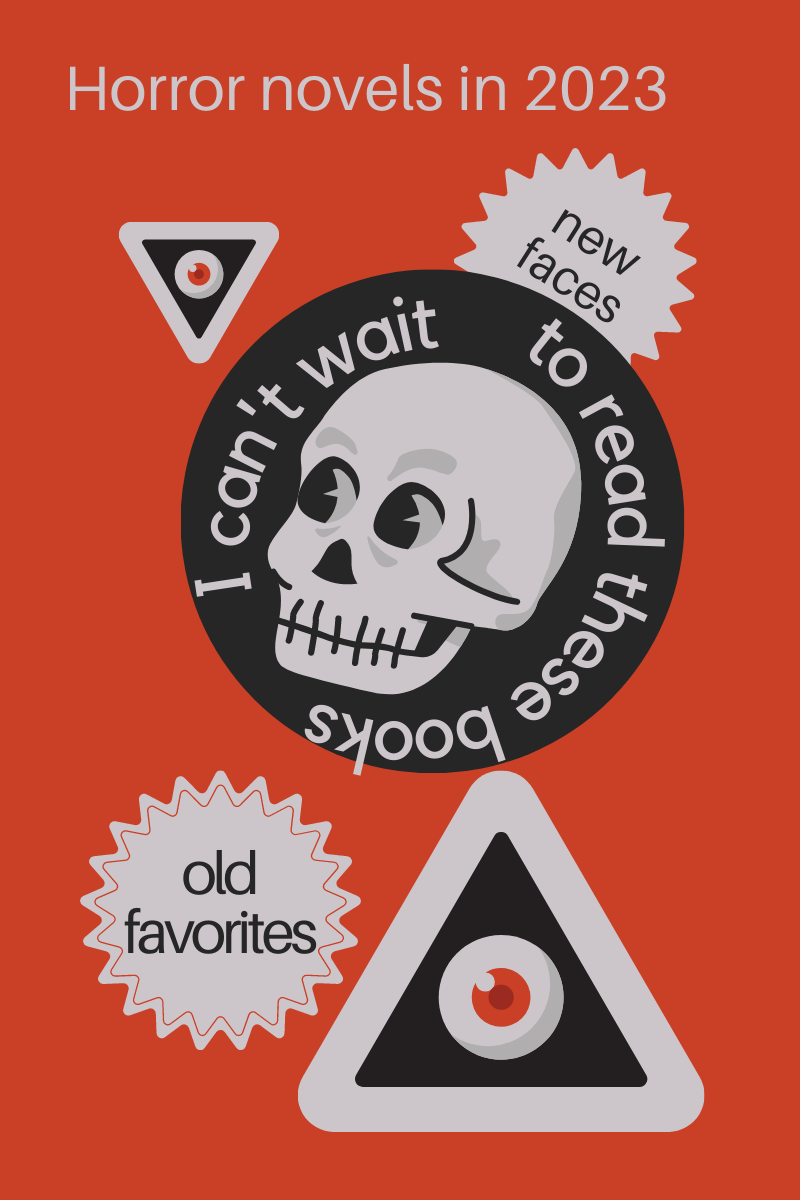 2022 was a great year for horror novels. I enjoyed quite a few amazing titles, but I’m looking ahead to 2023 and can’t wait to see what’s in store.

It’s no secret that I really grew to love Grady Hendrix novels in 2022. His quirky sense of humor and his thrilling plots made me a real fan. Last year, I read quite a few of his books, including my favorite: Horrorstor. This year, he has a new one coming out, How to Sell a Haunted House, and I can’t wait to read it.

Mostly, she doesn’t want to deal with her brother, Mark, who never left their hometown, gets fired from one job after another, and resents her success. But she’ll need his help to get the house ready for sale because it’ll take more than some new paint on the walls and clearing out a lifetime of memories to get this place on the market.

Some houses don’t want to be sold, and their home has other plans for both of them…

Jones is another author who falls under the ‘if he writes it, I read it’ umbrella. All the Good Indians and My Heart is a Chainsaw were two that I wanted to re-read the minute I finished them. In 2023, Jones has two new ones coming out. The first is a sequel to My Heart is a Chainsaw and book two of the Lake Witch trilogy.

Four years after her tumultuous senior year, Jade Daniels is released from prison right before Christmas when her conviction is overturned. But life beyond bars takes a dangerous turn as soon as she returns to Proofrock. Convicted Serial Killer, Dark Mill South, seeking revenge for thirty-eight Dakota men hanged in 1862, escapes from his prison transfer due to a blizzard, just outside of Proofrock, Idaho.

Thirty-six hours and twenty bodies later, on Friday the 13th, it would be over.

I read Kingfisher’s book The Hollow Places in a horror novels club I belong to, and I found it both charming and terrifying. Kingfisher has a real skill for characterization and world building. My favorite part of The Hollow Places was the delightful, little museum that took center stage in the story. I’m hoping for more of that quirky, charm in A House with Good Bones.

A haunting Southern Gothic from an award-winning master of suspense, A House With Good Bones explores the dark, twisted roots lurking just beneath the veneer of a perfect home and family. “Mom seems off.” Her brother’s words echo in Sam Montgomery’s ear as she turns onto the quiet North Carolina street where their mother lives alone. She brushes the thought away as she climbs the front steps. Sam’s excited for this rare extended visit, and looking forward to nights with just the two of them, drinking boxed wine, watching murder mystery shows, and guessing who the killer is long before the characters figure it out. But stepping inside, she quickly realizes home isn’t what it used to be. Gone is the warm, cluttered charm her mom is known for; now the walls are painted a sterile white. Her mom jumps at the smallest noises and looks over her shoulder even when she’s the only person in the room. And when Sam steps out back to clear her head, she finds a jar of teeth hidden beneath the magazine-worthy rose bushes, and vultures are circling the garden from above. To find out what’s got her mom so frightened in her own home, Sam will go digging for the truth. But some secrets are better left buried.

She is a Haunting by Trang Thanh Tran has been compared to one of my favorite reads from last year, Mexican Gothic. I’m eager to give this one a try.

A House with a terrifying appetite haunts a broken family in this atmospheric horror, perfect for fans of Mexican Gothic. When Jade Nguyen arrives in Vietnam for a visit with her estranged father, she has one goal: survive five weeks pretending to be a happy family in the French colonial house Ba is restoring. She’s always lied to fit in, so if she’s straight enough, Vietnamese enough, American enough, she can get out with the college money he promised. But the house has other plans. Night after night, Jade wakes up paralyzed. The walls exude a thrumming sound while bugs leave their legs and feelers in places they don’t belong. She finds curious traces of her ancestors in the gardens they once tended. And at night Jade can’t ignore the ghost of the beautiful bride who leaves cryptic warnings: Don’t eat. Neither Ba nor her sweet sister Lily believe that there is anything strange happening. With help from a delinquent girl, Jade will prove this house–the home they have always wanted–will not rest until it destroys them. Maybe, this time, she can keep her family together. As she roots out the house’s rot, she must also face the truth of who she is and who she must become to save them all.

There are a lot of great horror novels coming out in 2023. You can read a more comprehensive list at BookRiot.

This one seems very interesting. It received enthusiastic praise from Kazuo Ishiguro and Silvia Moreno-Garcia, two of my favorite authors. I can’t wait to try it!

A young father and son set out on a road trip, devastated by the death of the wife and mother they both loved. United in grief, the pair travel to her ancestral home, where they must confront the terrifying legacy she has bequeathed: a family called the Order that commits unspeakable acts in search of immortality. For Gaspar, the son, this maniacal cult is his destiny. As the Order tries to pull him into their evil, he and his father take flight, attempting to outrun a powerful clan that will do anything to ensure its own survival. But how far will Gaspar’s father go to protect his child? And can anyone escape their fate? Moving back and forth in time, from London in the swinging 1960s to the brutal years of Argentina’s military dictatorship and its turbulent aftermath, Our Share of Night is a novel like no other: a family story, a ghost story, a story of the occult and the supernatural, a book about the complexities of love and longing with queer subplots and themes. This is the masterwork of one of Latin America’s most original novelists, “a mesmerizing writer,” says Dave Eggers, “who demands to be read.”

There you have it! There are so many horror novels to look forward to, and I just know that I’ll find plenty of others along the way. What books are you anticipating for 2023? Let me know in the comments!

If you’re enjoying my take on horror, why not sign up for my newsletter? It comes out twice a month and offers freebies, discounts, and updates on my own work. If you join, you can receive a copy of my novella, The Demon’s Prisoner as well.