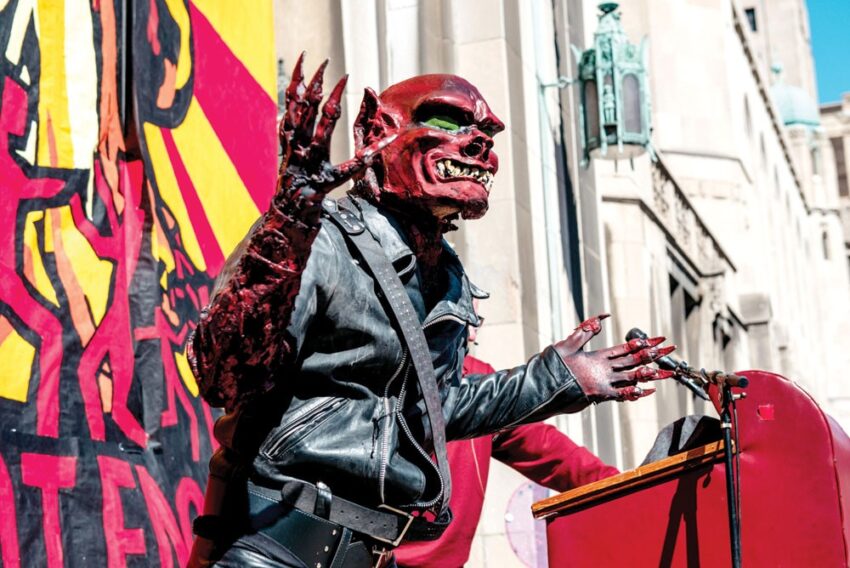 As a horror writer, I love setting my books and stories in Michigan, especially in Detroit. There is plenty of urban energy in the city, and if you’ve been reading my work, you’ll know that monsters love dark alleys and abandoned buildings. Monsters such as the legend of the Nain Rouge.

The Nain Rouge (aka the red dwarf or the ‘demon on the straits’) strikes terror in all who see it. It’s the size of a man with a fearsome, red face, fangs, and pointed ears. It dresses all in bad-ass black. But it isn’t the creature itself that frightens its victims; it’s the knowledge that the demon fortells disaster.

The stories surrounding this creature go back to the 1700’s when the founding father of Detroit,  Antoine de la Mothe Cadillac, encountered the beast and struck it with his cane. Big mistake. The demon cursed him (and the city), which resulted in Cadillac losing his position and his fortune. He definitely should have listened to the fortune-teller who told him to appease the demon instead of attacking it.

Since then, the legend of the Nain Rouge has continued through the centuries. It’s told that the red imp appears as a harbinger of doom and if you see it, bad things are sure to follow. It was spotted right before the great fire of 1805 nearly burned the city to the ground. Then again in 1812 when British forces began bombarding US forces stationed there.

The Legend of the Nain Rouge in Modern Times

The most recent spottings of the demon of the straights occurred in 1967 before the start of the race riots. Then again in 1978, when an ice storm devastated the city.

This brings us to 2022 when a group of Detroit residents decided to take the advice of the old fortune-teller and give the Nain Rouge the respect it deserves. Since everyone loves a parade, the Marche du Nain Rouge was born.

Nowadays, people in costumes and those on floats travel the famous Cass Corridor while folks on the sidelines hold signs supporting the Nain. At the end of the festival, an effigy of the demon is burned.

Like many stories, the boundary between truth and fiction remains unclear. However, the entertainment factor (and in my case, inspiration factor) are worth a great deal.