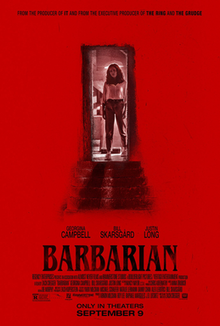 I started hearing about Barbarian a few weeks ago. Soon, the trickle of news became a flood, and I knew that I had to watch it before the inevitable spoilers were released. The movie was much different than I had expected, but it was a thrill ride nonetheless. My Barbarian movie 2022 review is also somewhat biased, since it takes place near where I lived for the past thirty years: Detroit, Michigan.

Barbarian starts with a simple premise: a young woman named Tess rents an Airbnb which is already occupied. It’s a dark, rainy night in a bad neighborhood, and Tess finds herself with a decision: take up a strange man’s offer to share the house, or sleep in her car for the night. With this simple premise, the surprises keep coming.

What I liked most about this movie was that it always went in unexpected directions. Just when you thought you knew what was going to happen, the narrative changed and delivered something else entirely. I had thought that the movie would be a kind of Hostel remake, but that wasn’t true at all. Instead, the audience is taken on a thrilling roller coaster ride that gets more and more out of control.

Everything about this movie is delightfully creepy. The house, the characters, and the neighborhood all play a part in making this one of the most engrossing movies I’ve seen in a while. Barbarian preys on fears of being alone with a stranger, being alone in a bad neighborhood, finding evidence of a horrible crime, and so much more. There are jump scares here, but the real terror comes from discovering how things can suddenly go from bad to worse.

In Barbarian, evil comes in all forms. Yes, there are monsters, but a lot of the damage comes from ordinary humans. The barbarian in the title could be anyone.