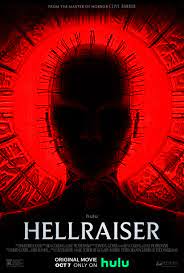 As I mentioned in a previous blog post, my plan for this Halloween season was to watch Hellraiser. After watching it, I checked my favorite on-line horror discussion board to see what others thought of it. To my surprise, there was a backlash against the movie, calling it too ‘woke’. I’m never surprised by audience reactions to movies, but this one stunned me. Is Hellraiser 2022 really too ‘woke’ for modern audiences?

One of the things I liked best about the Hellraiser series of movies is that each one is unique. Clive Barker’s original movie set up the basics for the sequels, but other than the box and Pinhead, there is very little similarity among them. Although Hellraiser 2 incorporates a few of the characters from number one, consecutive sequels have their own take on the box, Pinhead, and the cenobites.

Most of the sequels take a great deal of creative license with Barker’s original story. The sequel that I found most interesting (but ironically liked the least) was Bloodline (or, as I like to think of it, Pinhead in space). But there have also been gumshoe detective sequels and one with MMORPG players. I might not have liked every sequel, but I do applaud the sheer inventiveness of each of them.

Which brings us to the 2022 version. Yes, it is more modern than the other sequels. There is a gay couple who become involved and Pinhead is a woman this time around, but the movie doesn’t pander to a ‘woke’ audience. All it does is reflect society as it is—progressive. In fact, next to the original movie, the 2022 version is my favorite.

If you remember, I was on the fence about Peacock’s release of Them. I thought that the movie’s message sometimes eclipsed the actual horror movie. As a writer, I believe that a creator’s message should take a backseat to the story. But in Hellraiser 2022, the gay couple and the female Pinhead blend into the background. They don’t take center stage. This movie isn’t sending a message to the audience, it is simply doing what every other version of Hellraiser has done: created an entertaining experience for the audience.